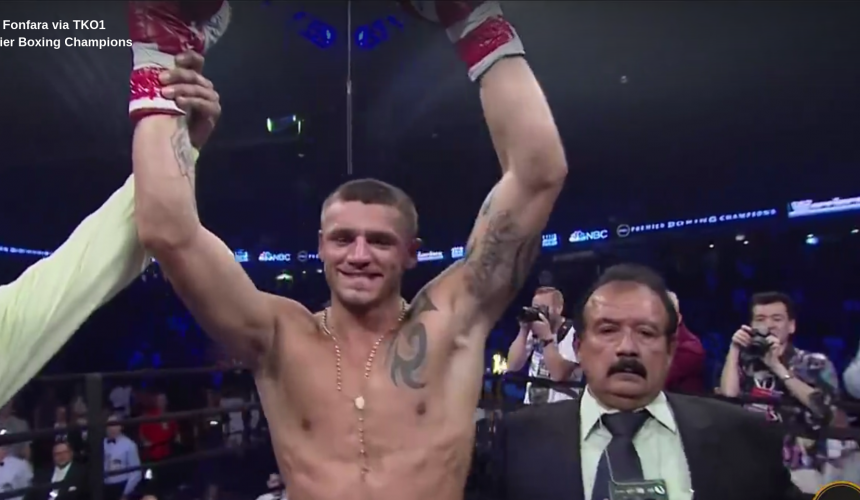 This article written by Greg Logan originally appeared in Newsday.

When Long Island light heavyweight Joe Smith Jr., trainer Jerry Capobianco and their team arrived in hostile Chicago territory, they understood they were prohibitive underdogs against Andrzej Fonfara in the eyes of critics who said the “club fighter” from Mastic didn’t belong in the same ring with a top contender.

They saw Fonfara and his team in fancy matching uniforms in the lobby of the hotel they shared, Capobianco said Sunday, and “it was like we were the Long Island Ducks, and they were the New York Yankees. We were the Bad News Bears.”

But Smith, who works as a laborer for General Building Laborers Local No. 66, came armed with the conviction that he was perfectly prepared to seize his life-changing moment on the Premier Boxing Champions card on NBC Saturday. He grabbed destiny by the throat and didn’t let go, scoring a technical knockout at 2:32 of the first round in a fight that instantly became a candidate for upset of the year.

The victory gave Smith (22-1, 18 KOs) the WBC international light heavyweight belt and likely enabled him to bypass the top contenders in the division to position himself as a future mandatory bout for WBC light heavyweight world champion Adonis Stevenson (27-1, 22 KOs), who is scheduled to make his seventh title defense against Thomas Williams Jr. (20-1, 14 KOs), on July 29 in Quebec City, Quebec.

Smith’s team saw a vulnerable target in Fonfara (28-4, 16 KOs). In training less than two weeks before the fight, Capobianco said Fonfara had trouble going backward, and even though he is a volume puncher, he leaves himself open at times.

Smith’s team believed in the power and the determination possessed by their man, and they shared a powerful sense of destiny when they entered the ring. “We were sort of smiling to each other,” Capobianco said. “It was almost like we knew. Joe was smiling, almost laughing to himself because this was the moment. A lot of people thought we didn’t belong. Our team felt, ‘This is it.’”

The strategy was for Smith to start quickly and not allow Fonfara to set his usual high tempo. Capobianco admits he was worried about Fonfara’s straight right, but he wanted Smith to go to the body early and let Fonfara feel his strength.

“We saw at the open workout that he held his elbows in real tight,” Capobianco said. “That was definitely an advantage to us. He changed his plan early by fearing Joe’s power.”

Fonfara’s elbows were pinned tight to protect his ribs with just over a minute left in the opening round as Smith delivered a crushing overhand right to Fonfara’s jaw that dropped him instantly. Fonfara regained his feet but not his balance, staggering toward the ropes before he could continue.

Showing great poise for someone with no experience in major fights, Smith took his time and moved in purposefully to land 12 unanswered punches, ending with a left-hook, straight-right combo that put Fonfara down for the second time and ended the bout suddenly.

“Any KO Joe ever had, he always finishes big,” Capobianco said. “Once he hits a guy, he doesn’t stop until he goes down. Joe doesn’t let you off the hook.”

Nothing is certain in boxing, but assuming Stevenson wins his next bout, Smith should be in his future. Capobianco expressed his admiration for the way Fonfara and his team handled such a costly loss.

“They were heartbroken,” Capobianco said. “I’m sure they lost $1 million. We were in the same hotel celebrating after the fight. Fonfara came to the room, gave Joe a hug and took a picture with him raising Joe’s hand. It was impressive.”