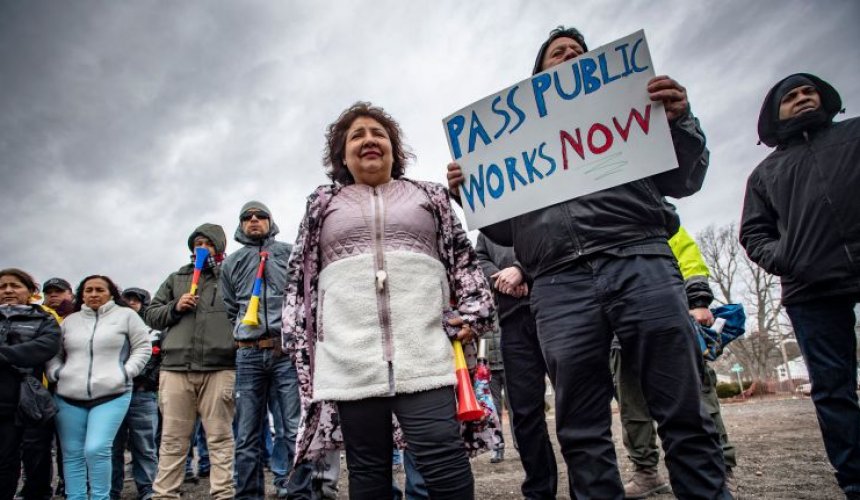 This article first appeared in Newsday.

About 70 unionized construction workers and their supporters called Thursday for including an expansion of the prevailing wage for building projects in the 2019-20 state budget due April 1.

Holding signs that read “Stop Out-of-State Workers” and “Pass Public Works Now,” members of Local 66 of the Laborers’ union and Local 78 of the Asbestos, Lead & Hazardous Waste Laborers’ union said the wage rate for builders on private construction projects that receive tax breaks should be the same as on government projects.

Bills before the State Legislature that would extend the prevailing wage requirement to more construction projects have been called “public works” legislation.

“Today is about accountability and about passing public works in the state budget by April 1,” Local 66 official Josh Slaughter said at the rally near the Wyandanch Rising development in Wyandanch. He said the legislation would require developers receiving tax subsidies “to pay a good fair wage to local workers and local contractors.”

Local 66 and other unions have criticized Wyandanch Rising developer Albanese Organization Inc. for not hiring local union builders exclusively for the blight removal project, which has received millions of dollars in tax breaks and grants from Babylon Town and New York State. A representative of Garden City-based Albanese wasn't immediately available to comment on Thursday.

"The labor unions are going to end up with nothing, because projects won't get built because developers won't be able to get the financing" to cover the increased construction costs, said Mitch Pally, CEO of the builders institute. "Right now, most of the labor unions are very reasonable in what they want. They make arrangements with developers and projects get built. ... Almost every major project on Long Island has organized labor on the job."

He said if the current prevailing wage proposal became law, local unions and developers wouldn't be able to negotiate contracts that pay good wages but are below the prevailing rate.

In Wyandanch on Thursday, union members were joined by a bipartisan group of Assembly members and county legislators.

“The prevailing wage will affect everyone, union and nonunion,” said Assemb. Phil Ramos (D-North Bay Shore), deputy majority leader. “We are asking for a decent wage so people will have a decent life.”